Christmas cracker versus Christmas crackpot.
Workaholic Angela (Rachel Nichols) leaves her office late on Christmas Eve with the intention of spending the holidays with her family. However, psycho security guard Thomas (Wes Bentley) has other ideas: he wants the pretty woman to spend the festive season with him and will do anything to get his way.

In my humble opinion, an underground car parkparticularly an almost deserted one late at nightis the perfect setting for a scary movie: full of hard, unforgiving, concrete surfaces (perfect for inflicting pain), dark menacing shadows, and eerie echoes, this unique environment offers horror film-makers maximum scope for scaring the bejeezuz out of an audience (I still shiver thinking about the car park scene in Zach Snyder’s Dawn of the Dead).

Certainly, P2to my knowledge, the first film to be set entirely within such surroundingsbenefits immensely from its creepy locale’s ominous ambiance: with little more than a routine ‘woman in peril’ scenario for a plot, director Franck Khalfoun relies heavily on his cavernous, subterranean environment to provide atmosphere and scares. Narrow corridors of light surrounded by blackness; flickering neon bulbs; ever vigilant surveillance cameras; claustrophobic elevators and uncomfortable crawlspaces: every aspect of the car park setting is cleverly used to breathe new life into tired material.

Spirited performances from the film’s two leads also help to gloss over the film’s numerous plot holes and clichés: Bentley is required to over-act as though his life depends on it, and obliges with an impressive, no-holds-barred display of nuttiness (in one hilarious scene, he even gets to pretend he’s Elvis!). Nichols also handles her role well, scoring maximum points for her screaming, running, and ability to look unfeasibly hot in a flimsy dress (worn for no other reason than to permit viewers a chance to ogle her impressive cleavage).

Occasionally, the material does get a little TOO predictable for its own good: a couple of moments that attempt to deliver the ‘surprise factor’ fail spectacularly, and the result of the climactic showdown between Angela and Thomas is telegraphed way too early (close-ups of leaking petrol and a sparking Taser can mean only one thing…). However, with one particularly violent set piece guaranteed to shock all but the most desensitized of gore-hounds, and the constant distraction of Rachel Nichols’ magnificent heaving chest, I find it fairly easy to be forgiving about the film’s weaker moments, hence my possibly-too-generous rating of 7 out of 10.

Unusual And Entertaining Holiday Horror-Thriller.
“P2” is about a young businesswoman, Angela Bridges (Rachel Nichols) who finds herself working late on Christmas Eve in her New York city office building. The last one to leave the building, she finds her car won’t start. Parked on level P2 in the building’s underground parking garage, she runs into a security guard, Thomas (Wes Bentley) who tries to help fix the car. After the failed attempt, Angela is scrambling to try and make it home where her family is waiting for her. But when she becomes locked in the parking garage, she finds herself in a fight for survival when Thomas, a psychologically unstable man, kidnaps her and intends to spend Christmas Eve with her… if she can stay alive through the night.

While it may have a rather obscure title, “P2” is a pretty solid thriller that came about just in time for the holiday season. I enjoy Christmas-set horror movies, there’s something gleeful about yuletide scares for fans of horror films, and I typically tend to enjoy them, “P2” being no exception. And while the fact that it takes place during Christmas has nothing to do with the story whatsoever, it gives the movie a little boost of something different. The film starts out at a steady pace and not much happens for the first thirty or so minutes, and then afterwards things begin to kick in and the thrills and spills start up, welcomely, of course.

Written by Alexandre Aja, a French filmmaker who brought us “High Tension” and “The Hills Have Eyes” remake, the story is something halfway original. It takes the typical struggle between a psychopathic man and a strong-willed woman and places it in an unusual environment which provides for some pretty unique occurrences and plenty of great opportunity. Parking garages are creepy places anyway, with their low-ceilings, cement walls, and dark and damp atmosphere – so why not set a horror movie there? After our protagonist is kidnapped, the antics between her and the psychopath ensue, and I felt that this was fairly well-written. The pacing has a few problems, things would become extremely intense, and then the movie would slow to almost a stop, then kick in again, which became a little tiring, but it wasn’t enough to kill the film for me.

Rachel Nichols performs well in her first leading role here, playing the strong-willed Angela, and Wes Bentley is plays the quirky, offbeat character (it somewhat reminded me of his character in “American Beauty”, just in a psychopathic-murderer form) well. Both actors have talent, and do well throughout the majority of the film, although some moments do come off as a little campy – I’m sure the writing had a little fault with this too, but it isn’t a major problem. It’s not a terribly gory film, either. There are a few pretty nasty moments, but they are for the most part few and far between. The atmosphere is damp and dark as a parking garage, and the Christmas setting (brought through with some Christmas tunes to play along with a few scenes) is effective and neat. There are a handful of excellent and memorable scenes (the car-ride murder scene and elevator being most clever). Most of the movie is what could be classified as a ‘psychological thriller’ in which Thomas is playing a cat-and-mouse game with Angela. The ending is quite the kicker, and I thought it was a good way to close the story.

Overall, “P2” is an above-average horror/thriller. It delivers enough thrills to keep the audience entertained, and is well-written for the most part. The premise may not be terribly original, but the main thing that this film has got going for it is it’s unusual but effective setting (that is made well-use of). I enjoyed the majority of this film, and while it is a bit campy in moments, overall it’s a fun movie that horror fans should be advised to check out in conjunction with the holiday season. This will likely fall under my little list of must-see Christmas-themed horror movies, because it’s one of the better ones. 7/10. 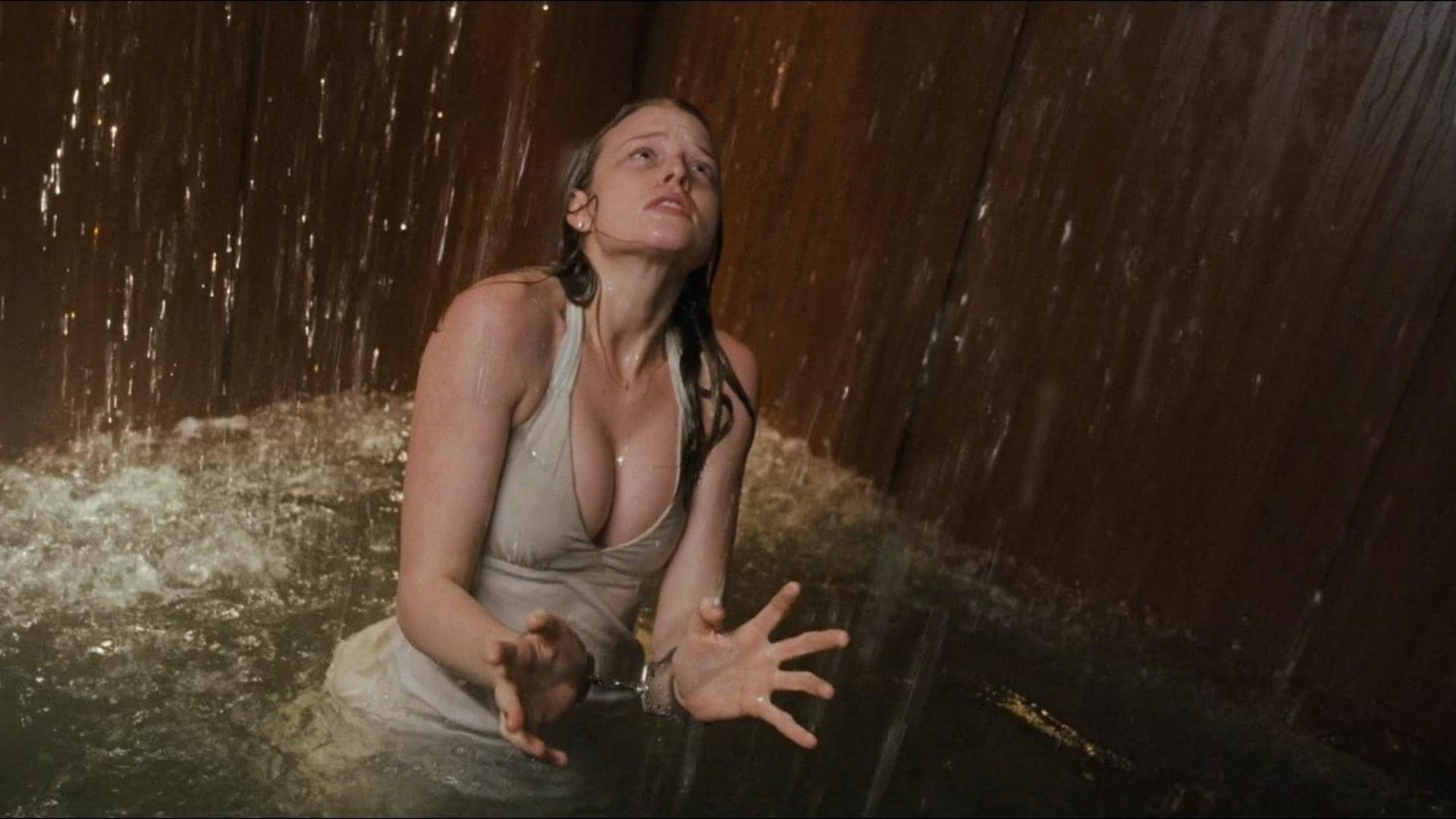