Very much enjoyable, this.

‘The Rocketeer’ exceeded my expectations in truth, I wasn’t expecting much given the opening few minutes. However, thankfully, it ends up producing an entertaining 108 minutes. Cool superhero, great score and a likeable cast list.

The premise is properly bonkers, especially towards the end, but they make it work and deserve credit for doing so. There are numerous recognisable faces onscreen, all of the main talent give good performances.

Billy Campbell plays the lead role, Cliff. I’ve (relatively) recently become aware of him via television’s ‘Cardinal’ – which is outstanding btw, check it out if you can – and loved him in that, he’s also very good in this. Jennifer Connelly (Jenny) and Alan Arkin (Peabody) are also involved, as are Paul Sorvino (Eddie) and Timothy Dalton (Neville). I enjoyed Dalton, he portrays his role very well.

The pacing is solid, thanks also to the noteworthy action and James Horner’s score. All in all, this is a film I would definitely recommend; it’s certainly nearer the top than the bottom of Disney’s live-action offerings up until 1991.

Rocketeer is directed by Joe Johnston and co-written by Danny Bilson, Paul De Meo and William Dear. It is based on Dave Stevens’ comic book The Rocketeer. It stars Billy Campbell, Jennifer Connelly, Alan Arkin, Timothy Dalton and Paul Sorvino. Music is scored by James Horner and cinematography by Hiro Narita.

It took eight years to get to the screen, with many rewrites, changes in personal, changes in setting and etc, the only thing consistent was Disney’s inconsistency. Once out the film received generally positive reviews but posted only a small profit, in the wake of a Tim Burton inspired reinvention of the Super Hero genre, Rocketeer fell away into cultdom, sequels planned were shelved and its reputation remains to this day one of being a misfire. Unfair say I! Rocketeer is a lovingly crafted adventure film, nodding towards the serials of the 1930s, it’s awash with period Hollywood delights, Art Deco imagery, has a damsel in distress, square jawed heroics, Nazi villains, wonderful effects and a blunderbuss Zeppelin finale. Backed by beautiful smooth tone photography and an evocative heart stirring music score, it’s a family friendly blockbuster that ticks all the requisite boxes. The quality of the action sequences still hold up today, and Johnston, who wanted the job big time, directs with a knowing grasp of the setting, and crucially he never once loses a grip on tone and pacing. There’s no self parody here, no deep Fruedian dissection of the main character, just a honest to goodness good against bad axis, with a romantic cause deftly wafted over proceedings.

The role of Cliff Secord (Rocketeer) proved hard to cast, where Vincent D’Onofrio turned it down and “name” actors such as Dennis Quaid, Emilio Estevez, Kurt Russell and Bill Paxton auditioned for the part. Paxton, it’s believed, was very close to getting it as well. Disney wanted an A list man, Johnny Depp and Kevin Costner were mooted, but Johnston had a feel for unknown Billy Campbell and managed to convince nervous Disney heads that he was perfect. Much of the scorn that has flown towards Rocketeer has landed at Campbell’s door, again, this is unfair. It’s hard to tell if one of those A list actors could have made the character work better, for it helps in this instance to not have a familiar face propelling the adventure. There’s an innocence, an awkwardness to Campbell’s portrayal that just sits right for a guy stumbling upon a rocket pack and finding himself submerged in a chase and harry battle against bad. He also has the looks, a handsome dude who creates a homespun based chemistry with the sensuous Connelly. It’s Dalton’s movie, though, he’s having a devil of a time as the chief villain. Modeled on Errol Flynn and the spurious notion that he was once a Nazi spy, Dalton has the looks, the gusto, the moustache twirling shiftiness and a voice perfect for such material. A roll call of great character actors fill out the support slots, with Terry O’Quinn, Paul Sorvino and Ed Lauter particularly striking the right chords.

A smashing piece of escapism, no pretensions or ideas above its station. The willingness to tap into the basic premise of a comic book actioner and entertain in grand Hollywood terms, to be applauded. And I do, and I do love it so. 8/10

Two-fisted tribute to the serials of yesteryear
THE ROCKETEER

Based on Dave Stevens’ graphic novel, this very un-Disney-like Disney movie is a joy from start to finish, a two-fisted tribute to the serials of yesteryear which combines nostalgia for the innocence of ages past with the Art deco gloss of a world on the brink of war. Bill Campbell (from TV’s “Tales of the City”) plays a 1930’s air ace who stumbles on a jet-propelled device that allows its wearer to fly at high speeds, a device coveted by law enforcement agencies, gangland criminals, Howard Hughes (!), and a Nazi villain (Timothy Dalton) masquerading as a Hollywood heartthrob.

Handsome and talented, Campbell plays the title role with just the right amount of wide-eyed candor and boyish charm, and he’s supported by a veritable who’s-who of Hollywood’s finest character actors, including Alan Arkin, Paul Sorvino, Terry O’Quinn, Ed Lauter, Jon Polito and Eddie Jones, alongside Tiny Ron as a hulking henchman clearly modelled after Rondo Hatton (courtesy of Rick Baker’s rubbery makeup), whose speciality is – you guessed it – *snapping spines*! Sadly, Jennifer Connelly is unable to make much of an impression as Campbell’s eye-candy girlfriend, an old-fashioned heroine who lacks autonomy and is almost entirely dependent on her co-star’s strength and bravery. That small blip aside, director Joe Johnston (HIDALGO) plays the whole thing straight, without even a hint of camp (when Campbell asks how he looks in his spiffy ‘Rocketeer’ outfit, Arkin deadpans: “Like a hood ornament!”), and while the characters are mere stock figures, they’re played with real integrity by an enthusiastic cast, and the film’s many set-pieces culminate in a showstopping finale on board an exploding zeppelin high above the Hollywood hills! Yep, this is one movie where you *definitely* get your money’s worth!!

Produced today, the script (by Danny Bilson and Paul De Meo) might have been co-opted by some overpriced ‘star’ whose off-screen notoriety could sap the magic out of every frame. It’s the fact that Campbell WASN’T a household name during filming, and that the production dares to celebrate the movies of a bygone era without simultaneously mocking its references, which makes THE ROCKETEER so special. It carries none of the baggage that a major celebrity would have brought to it, and is simply a thrill-ride, no more or less, packaged and presented as a widescreen spectacle for audiences young and old (and DO try to see the film in its original Panavision dimensions). Incredibly, the movie underperformed at the American box-office, despite playing in 70mm (blown up from the original 35mm) at selected venues, though it has since found an appreciative audience on TV and home video. Originally released in the UK as ROCKETEER, an unnecessary abbreviation.

A Delightful Adventure Like in the Old Times
In 1938, in Los Angeles, the pilot Cliff Secord (Bill Campbell) crashes his plane after being hit in the air in a shoot-out between gangsters and FBI agents in a car chase; completely broken, his best friend and mechanics A. ‘Peevy’ Peabody (Alan Arkin) tries to fix an old plane to raise some money in an exhibition show. However, Cliff finds a package hidden by one of the gangsters with a rocket with belts and they find that the device allows man to fly. Meanwhile, his beloved girlfriend and aspirant actress Jenny Blake (Jennifer Connelly) succeeds in an audition to make a small part in a movie of the great actor Neville Sinclair (Timothy Dalton) that is ranked the third in box-offices. During a flight exhibition, the mechanic Malcolm (Eddie Jones) has an accident, and Cliff uses the rocket to save him, being called Rocketeer by the public. With his picture in the front page of the newspaper, Cliff is chased by the FBI, the gangsters and German spies that abduct Jenny and forces Cliff to rescue her.

“Rocketeer” is a delightful adventure that recalls those classics from the old times of Hollywood. There is a handsome hero, a gorgeous heroine, gangsters, Nazi spies, betrayals, in a pace of cartoons with a magnificent art decoration, cars and costumes recreating Hollywood in the late 30’s. The story has great lines and uses real characters, like Clark Gable and Howard Hughes, in fictional situations. My vote is seven. 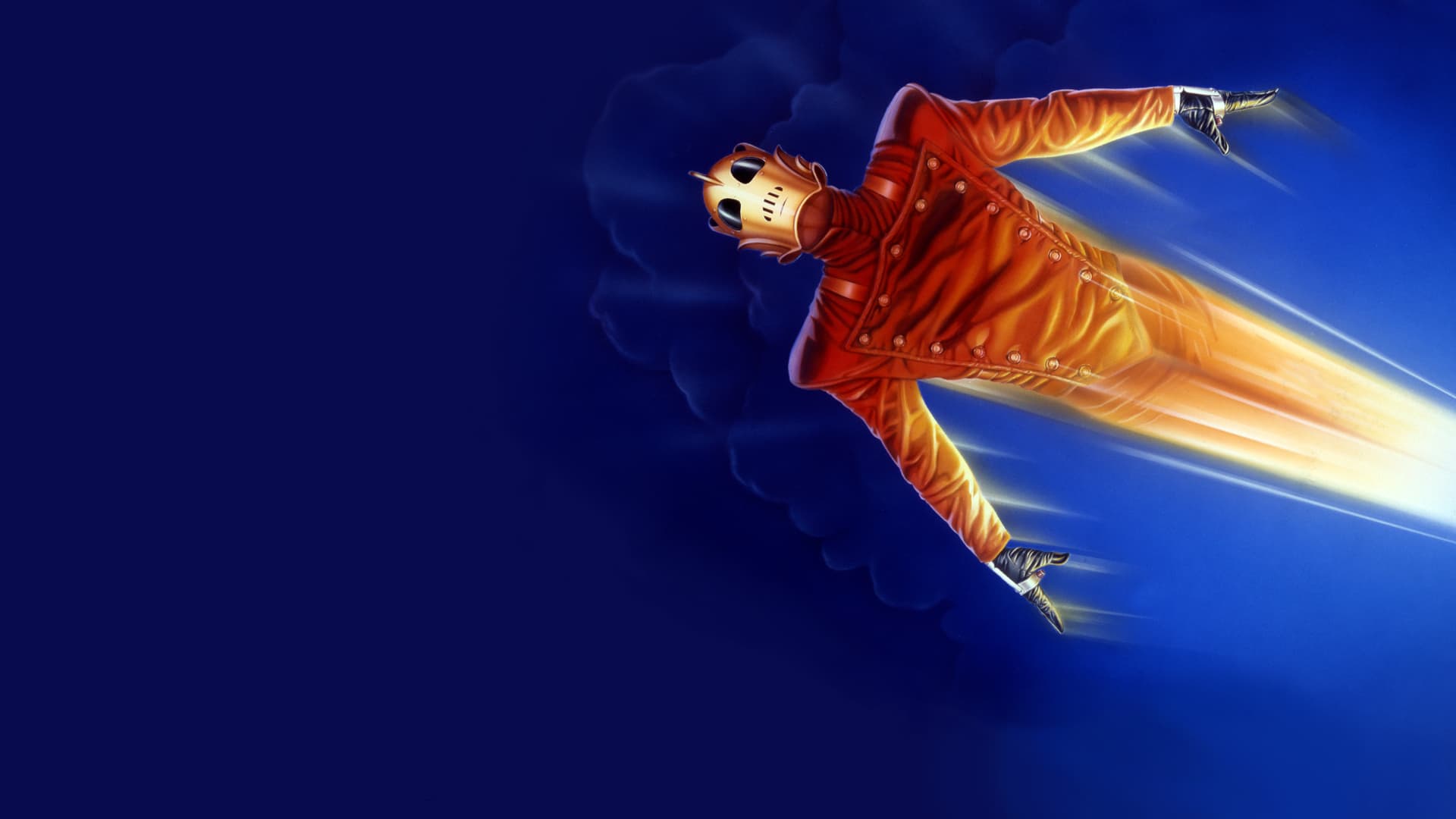