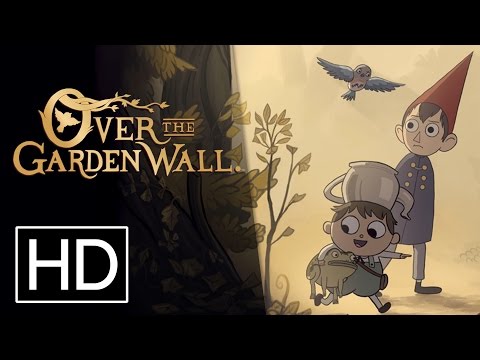 Over the Garden Wall 2014 Streaming Links:

Pretty great actually.
What can I say about this show? It has to be expirienced to grasp it, because of all these interesting characters which appear in the different episodes.

The main characters Wirt and Greg make up this pair of brothers of which Wirt is an insecure but straight one and Greg is a goofball with high spirits. Even though both serve a purpose in the series I kind of hated Greg most of the time, because the goofball role came of not as comedic but just stupid like a no-brain moron most of the time, but he gets better over time.

We encounter many interesting characters and scenarios through the episodes on their journey through the forest. Creepy stuff happens and they somehow solve it.

An unsetteling feeling hangs over every episode and the gorgeous backgrounds are made with great attention to detail to suit every feeling we’re supposed to feel and that is the core purpose of art! One of the highlights of this mini-series.

Worth watching for everyone who enjoys well crafted animation and fairy-tales.

Soulful, atmospheric and creative at times; annoying and infantile elsewhen
So first of all, when one considers watching this “series”, a question arises: “is it really under two hours total in duration with 10 episodes”? The answer is “yes”, and the next question is “why?” The first answer is “because perhaps the authors dislike the format of a feature film as much as I do, and realise that a series is an objectively superior format, but can’t quite reason why”. An alternative, truer, answer is that it could’ve been a legitimate animated series, but the authors didn’t want it to be. They came up with some ideas – some creative, some standard, some bad – the bones of a series, but never grew any meat on them and just threw them into the pot. The water’s all boiled out too, actually. It’s just the bones. 10 11-minute episodes, plot beat after plot beat, sidestory after sidestory all in succession. Well, that, and the musical numbers, but they’re just inexplicable (and horrid). Perhaps some of the authors are Indian, I’ve not yet checked.

What drew me in, was the promise that the show was going to be dark, perhaps “too dark for kids”. Having watched it, it’s only dark in a very specific sense – aesthetically. The colours are dark. There are some monsters, skeletons, graveyards etc. But it’s not even brothers Grimm, it’s Disney sneaking out with the brothers’ wintercoats and then doing a god-awful musical number in them. It is very safe for watching with kids, with the understanding that some things might go over their heads depending on the exact age, but that’s any story. The style is quite interesting – I’d, perhaps ignorantly, call it something like “American gothic in cartoon wrapping” – I was reminded of the “Rusty Lake” series of games, if much less gruesome and more logical than evocative.

Beyond the awesome aesthetics, one can certainly feel a soul in the production here. The problem is that the series flies ahead at such a crazy self-selected pace that the soulful bits are quickly choked when the next scene is an infantile quirky-random joke or, well, a musical number (god I hated those). There’s not enough anchoring the viewer to the good, thoughtful parts. Most of the humour falls flat (and is clearly aimed at the smallest kids, unlike the overall plot), but there is legitimately funny comedy here, too.

It is quite arbitrary/contrived too. And the composition is quite wrong, in my opinion – the penultimate episode should’ve been the 2nd, 3rd or 4th, so that while we wouldn’t quite start with a full clarity of the subtext there, we’d quicker understand “the stakes”, as it were. Perhaps they felt it would’ve lessened the importance of the Unknown world, but it’s not like the last episode demonstrates that – if nothing else, the separation between the Unknown and the, ehm, “known” worlds gives it layers.

It is a kids’ show after all, of course, but it could’ve been developed into something better for the kids and adults both. There are many ideas here that could’ve been better developed.